Eugene Peterson: A Man of Words 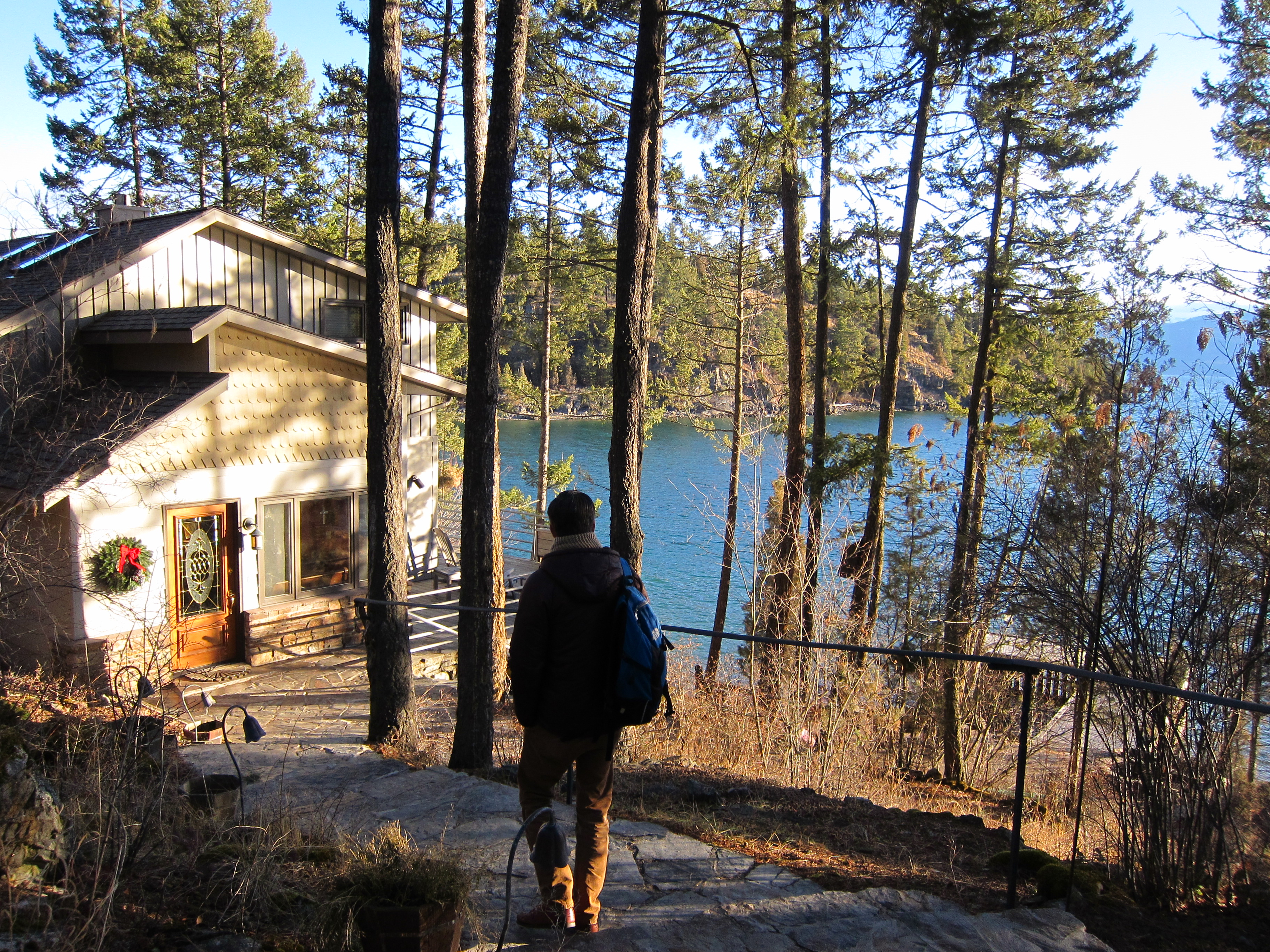 The unfamiliar beauty drew us in. Our eyes scanned the vast expanse of green out the airplane window as we approached our landing in Kalispell, Montana. It was the end of a long trip. The previous week was spent holed up in a coffee shop with J. I. Packer and camped out in the living room of James and Rita Houston. Hours of conversation had already been logged. Our minds were saturated in the deep things of God and our hearts were warmed by the love of these mentors. And yet, another home waited to continue the conversation. We had come to Montana upon the invitation of Eugene Peterson.

Eugene and Jan greeted us at their door with tenderness and joy. A bit bullish to dive in, we wondered if we would have the time to make our way through the long list of questions we had prepared in advance. As we took our seats in Eugene’s study we quickly realized he was in no hurry at all. Why would he be? He had committed to a conversation. A conversation requires an unhurried pace. It’s not a task to accomplish, but a fellowship to settle into. Eugene, the pastor, has committed himself to the kind of life that allows for good conversations – attentive and prayerful listening, flexibility to try out words, playing with them before one sticks with them, and of course space to tell a good story or twelve.

We spoke with Eugene that day about many things. Although we came to interview him, we were invited into a day of genuine conversation. This is Eugene’s temperament; he is always interested in opening up his life to another and inviting them to do the same. Although he hadn’t prepared them in advance, Eugene had questions for us as well. We spoke together about the church, pastoral ministry, and the Christian life. Eugene wields words like no one we have ever known, and his words were always seeking to shepherd, to invite deeper consideration and vulnerability. Eugene told us that pastors need to shepherd language, and that is what he has sought to do himself. It became clear that he wanted his words to be chewed on more than analyzed and dissected – storytelling and poetry are his first language. In the shadow of the social media enterprise that consumes too much of our lives, Eugene Peterson seems out of touch. If Twitter forces us into the pithy clichés of Job’s friends, Eugene seems as foreign as Job, wrestling through the nuanced and often unsettling reality of life with God in a fallen world.

This week we saw a series of interviews with Eugene published by Jonathan Merritt. We always love to hear from him. However, as we read them, something felt askew. The subtlety and tone we had come to know in conversation wasn’t the same. His answers felt hurried, and that’s not his pace, and his responses were jarring to us given what we’ve heard from him in the past and our own personal views. From short pithy answers, to an overly simple denial that megachurches are actually churches at all, there was something missing. We are not surprised to hear Eugene making bold statements. His prophetic sensibility is undeniable. Even for us personally, there were times in conversation when he would blow something up and then patiently walk with us picking up the pieces. But that was missing.

When we went to visit Eugene, we did so because we were on a journey to discover more fully what it meant to embrace the way of Jesus, and in particular how to do so in vocational ministry. Why seek out Eugene Peterson on such a matter? We sat in his study that day eager to listen because he is a sage of this way. Sages are stewards of the Jesus way. They speak in the cadence of biblical wisdom, a kind of wisdom that does not flourish in an age of viral marketing, the wisdom that doesn’t fit neatly into our prescribed tribal boxes.

As we talked about the American evangelical church Eugene indeed express concern. He worried about big crowds at churches, but in a manner far more nuanced than you might expect. At one point during our daylong conversation, Eugene told us,

“Crowds happen. Jesus had 5000 and 4000. So the crowd as such is natural. That happens circumstantially. But to cultivate it, and then find out ways to increase it and keep it, that is the part that is so, well, temptation is the right word. It was one of the temptations in the wilderness. Jump off the temple, that will get their attention!”

Eugene told us that he was worried, not of the crowds as such, but of the desire for the crowds. This is a far cry from denying a megachurch is a church. Indeed, at the time of our visit Jamin had just begun to work at Saddleback Church, a large megachurch in which he had grown up. As Jamin shared his sense of calling to Saddleback and his experience of ministry, at no point did Eugene assume it was not a real church nor that Jamin was not doing real pastoral work. Context, people, and place, these things all mattered as we talked about these things.

Eugene was worried about temptation, and he knew that temptation faces us from all directions. Some have wondered if Eugene has recanted his recent comments about homosexuality because of bad press, or pressure from the Christian book industry. The Eugene we know believes he is called to write books, not sell them. He is out of touch with platform building and social media leverage. He is unfamiliar with the game that too many of us know too well. When you attend to Eugene’s words, not just about homosexuality, but about everything said in these interviews, you can see he does not want to be bullet-pointed into oversimplification, not because he can’t speak to those issues and speak with clarity (his more recent clarifying interview demonstrates this), but because there are people involved, and people should be invited into conversation. We talked with Eugene about the church’s wrestling through the issue of same sex marriage, and while his heart in the matter was clear, he showed the concern of a pastor who knew real people were going to be caught up in the wake of our decisions. Eugene told us,

“The Presbyterian church was going through the issue of same sex marriage. The Lutheran church just did it. They did it last year. Thankfully, there are 12 Lutheran churches in the valley and 5 of them left. Withdrew. Our church did not, but not because they approved it. Most of them are of the age that this is pretty radical stuff. But because our pastor said, ‘These are our people.’ He went and asked in one sermon: ‘Who is the enemy? Who is your enemy?’ What does Jesus say? Love your enemy. Can you think of a better place to love your enemy than coming down to the communion rail and receiving the Eucharist? So, nobody left this congregation. But it really grieves me because so many of my friends are pulling their congregations out into a more sectarian world, and they’re doing it to maintain the purity of the church. I don’t think that’s ever been successful. Church has always been pretty dirty, messy.”

One can have a set view on a biblical matter and still have no idea what it looks like in practice. In fact, it’s our experience that most of us live in this very place. Eugene Peterson struggles to speak in tight, tweetable positions on these realities because real lives with real stories are involved. He is careful and caring with his words for pastoral use, but he is not calculated and cautious for public consumption. One is a language he has spent a lifetime cultivating, the other is foreign to him. When asked about a difficult topic, unlike most of us, we don’t think Eugene immediately thinks of the right answer, instead, he considers the souls to be shepherded. These are people with names. When we ask difficult questions, those questions deserve genuine conversation, not about abstract notions and depersonalized realities, but about people called into the complexity and messiness of the Christian life that often feels more like Job’s struggle than the cliché’s of Job’s friends.

In the social media mess that has been the aftermath of Eugene’s interview, may we again hear from him, that as Christians, as the priesthood of believers, we are all shepherds of language. May we use our language to love God and neighbor, and to invite people to converse, rather than to pigeonhole them into categories we can either praise or reject. As a part of our journey to discover Jesus’ way of power, it became clear to us that language, conversation, hospitality, and grace were all interconnected realties. When we sat with other sages like John Perkins, Jean Vanier, Marva Dawn and Dallas Willard, we encountered people much like Eugene. They all personified the kind of wisdom that comes through a commitment to being with people, having real conversations, humbly listening to others, learning their stories, and moving in love; it is a wisdom that is the fruit of loving God and loving neighbor. They have embraced hiddenness, such that their faithfulness to Christ is not a marketable asset to help sell their books, nor a means of gaining a following. Rather, their concern is the call to a long obedience in the same direction.

If Eugene has taught us anything, it is that shepherding words in the kingdom requires that we speak the truth in love. It demands both theological clarity and pastoral sensibility. As those who know and love Eugene, what we sensed in the first series of interviews this past week was an emphasis on the latter to the neglect of the former. And yet, while many of us read these interviews as discrete pieces of information on the internet, Eugene viewed them as the beginning of a conversation. He sought to prayerfully consider the way in which he had shepherded his words, and upon reflection determined shepherding his words would require greater theological clarity in a follow up interview. In the social media aftermath that has exploded since Eugene’s interviews, we are reminded of how little patience we have for ongoing conversation and reflection. When Eugene told us, “I am really leery of big answers,” it was not that he was afraid to speak his mind, but because he didn’t want to shut the door on people who need shepherding. As Eugene officially “steps off the stage” of public ministry, we must consider how to be Christians when we speak to each other, and we need to attend to our calling not to pit people against one another, but to converse in love. One of the great sins of the church today is that our words have become weapons of worldly power, and we have neglected their role to shepherd in the way of the lamb. When Eugene said something that seemed provocative, the internet exploded with click-bait; the question we must wrestle with is whether we are willing to listen to him now. Can we press into the messy, difficult, and personal, or will this just pass away awaiting a new war over whatever is the next shiny controversy to catch our eye?